The Embassy of Ireland, Japan is proud to announce that the distinguished poet, Mutsuo Takahashi has become the inaugural recipient of the Seamus Heaney Award, Japan.

The award recognises distinguished contribution to literary relations between Ireland and Japan.

Born in 1937 into a family of day labourers in northern Kyushu, he attended the Fukuoka University of Education, before moving to Tokyo in 1962, where he pursued a successful career as a copywriter before becoming a full-time writer. He is the author of more than twenty collections of poetry, eight collections of haiku and tanka, numerous works of prose and collections of essays, and has adapted, among others, Homer, Euripides and Sophocles. Among the many awards he has received, in 2017 he was designated a Bunkakorosha (Person of Cultural Merit) and became a member of the Nihon Geijutsu-in (The Japan Arts Academy) the most distinguished arts organization in Japan.

In Twelve Views from the Distance he writes of how as a young man his ‘soul felt a strong affinity for what was outside my world in the realm of the other.’ One of the most significant of these other places has been Ireland.

He has adapted Yeats’s At the Hawk’s Well as a Noh play, which was performed at the Kanze Noh Theatre in Tokyo in 1990. His abiding interest in Yeats has led him to travel to Ireland three times. On his first trip to Ireland in 1999, he toured Kerry, Sligo and Donegal, and held readings in Dublin and Belfast, meeting Irish poets, including Nuala Ní Dhomhnaill, Cathal Ó Searcaigh, Peter Sirr, Paula Meehan and Theo Dorgan. His memorable Belfast reading, with Michael Longley and Ciaran Carson, is celebrated in the poem ‘The Process’. As the critic Nobuaki Tochigi has written, ‘the weeks spent in Ireland were decisive for Takahashi in regaining his faith in poetry,’ and many of the poems in the poet’s volume, Saku no Mukou (‘Beyond the Hedge’), published in 2000, were inspired by this first visit to Ireland. In the poem ‘In Ireland, I’, he writes ‘The air that struck my cheeks, the sand and soil under my feet, / all of it was wide awake. I sensed it in every pore.’

The publication of On Two Shores: New and Selected Poems by Dedalus Press in 2006, which included translations of these ‘Irish’ poems, among other recent work, marked the first time a Japanese poet had been published by an Irish press. The book was launched in Dublin on the occasion of his third visit to Ireland, where Takahashi held a bilingual reading with his Irish translator, Frank Sewell.

It is entirely fitting that the inaugural recipient of an award named for Seamus Heaney should go to a poet. In his elegy for Heaney, ‘Talisman’, whom he admired greatly and met in person in Dublin, Takahashi writes: ‘The bog of death has embraced you alive to the lips, to the eyelids and then the forehead / and alive still you become our perfected memory, our talisman.’ 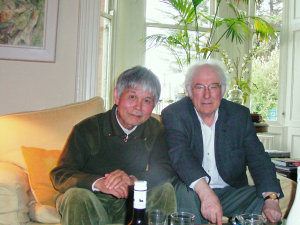